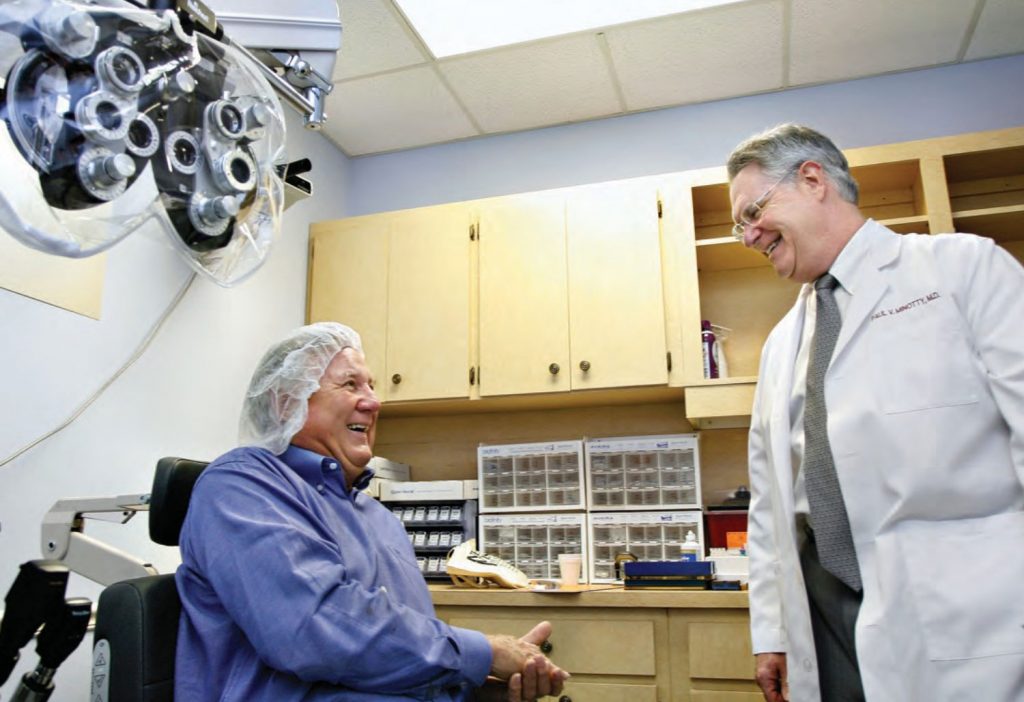 Health treatments for the eye are making such advancements, some procedures offered locally require less than a day of recovery.

So it’s no surprise more and more residents are choosing to have corrective eye surgery, as well as advanced treatments for cataracts.

One local practice, the New Vision Eye Center, is offering an advanced optical laser called the Allegretto Eye-Q Lasik device, which is able to reduce treatment to just a few seconds in most cases, and recovery often to one day.

The laser has a tracking system which maps the cornea and customizes the delicate work on thin tissue. That means that cataract sufferers with astigmatism can have that corrected too, walking away without the need for eyeglasses.

“Your eyes are something you use every day of your life,” says Dr. Paul Minotty, the president and a found- er of New Vision Eye Center, which opened in 2009. “Taking care of them is a lifelong process. It excites me to have more and better ways to look after people. I believe in comprehensive care,” he said, stopping amid the easy going hubub of his practice, where 35 employees, including three other ophthalmologists, create an energized, friendly atmosphere.

A long time resident of Vero Beach, Minotty is known for his friendly, talkative style with patients. He and Dr. Roger J. Meyer, and Dr. David J. O’Brien are all part of the New Vision team and have known each other for years.

The new instrument follows the curvature and structure of each individual eye faster than any system between Palm Beach and Orlando, according to its developers.

Meyer and O’Brien joined Minotty soon after he created Vero’s Florida Eye Institute in 1986, and they left the Institute shortly after he did in 2009 to rejoin him at the New Vision Eye Center in the Kutrell building last summer.

Dr. Stephen M. Tate joined the practice in September. The group plans to build a new 19,000-square-foot build- ing with a surgery center at 1055 37th place by the end of next year.

Cataracts produce clouding in the lens, obstructing the passage of light leading to vision loss and blindness if untreated. Half of the world’s blind- ness is due to this condition.

Surgery to replace the lens was until recently a process that required an injection to anesthetize the eye and area around it, and several days or longer recovery. Sometimes sight was not completely restored.

The laser employed by the Allegreto machine, called an excimer laser, depends on a “pseudo –molecule” produced by an inert gas, a reactive gas, and electrical stimulation of just the right kind. The ultraviolet light that’s produced is great for work on the eye, disrupting the surface of the cornea with ablation rather than burning, resulting in faster healing and less likelihood of infection.

But the past five years have seen a transformation of treatment. Simple drops are now used to prepare the patient. The old lens is removed with an ultrasound instrument that emulsifies and removes it. Tiny incisions are used for this process and small foldable lenses are inserted into the eye.

New Vision’s hand held device that removes the old lens, an Infiniti torsional phacoemulsificational system by Alcon, is the most advanced on the Treasure Coast, say its doctors.

Recovery is usually overnight with many patients even playing golf the next day.

The majority of cataract sufferers need additional attention, however. Most have some form of astigmatism, generally not treated in their past, and are wearing glasses that remain when the cataract surgery is completed.

Astigmatisms are caused by irregular curvatures in the cornea, causing some of the light rays entering the eye to never come to a discrete point. The expanded treatment range of the Allegretto system means New Vision can correct these problems. Cataract patients come away without need for any correcting eyewear.

Macular degeneration is another condition that brings patients into New Vision. Meyer, a retina specialist, has watched treatment improve dramatically the past 15 years.

“You get a breakdown in the layers of the retina,” says Meyer. “We can’t cure the dry kind, but lifestyle choices make a difference in slowing the progression of the disease. You have to stop smoking. We recommend eating leafy greens, and plenty of vitamin A, B and E and beta carotene in the diet; also fish oil and lutein. Wear good sunglasses and a hat.”

“The wet version, due to abnormal growth of blood vessels, can be treated with cold and hot lasers, and more recently with the drugs Lucentis and Avastin. These are effective, but require injections every four to 12 weeks.”

He explains research into DNA and RNA has led to the new drugs that work by inhibiting the action of VEGF, a growth factor for blood vessels.

“No treatment is perfect,” he says. “We try to optimize therapy by fine tuning, using a combination of treatments in just the right way, for each patient.”

General eye exams, diabetes–re- lated eye disease and cataracts are all conditions that come in every day to New Vision.

Tate’s specialties include cataract and multifocal intraocular lens surgery, glaucoma and retina conditions. Those who have had treatment at New Vision rave about the results, especially with the new laser.

Joey and Michelle Stawara are a husband and wife who shared a familiar malady, imperfect eyesight requiring glasses.

On Feb. 18 they shared a same-day solution. They both had corrective eye surgery using the Allegretto system.

Results were “totally incredible,” says Michelle Stawara, a Beachland Elementary teacher whose sight was so impaired even eyeglasses could barely assure clear vision.

For years she could not have con- tacts fitted, and even had to wear glasses to get up at night.

“I was so nervous, really nervous, but also excited,” says Michelle Stawara.

“I had a severe astigmatism and a very thin cornea that just couldn’t be worked on before. I couldn’t even see the big E on the charts. On Feb. 18, each eye took just 27 seconds and it was done.”

Michelle had to rest her eyes for several days, but was back in her class- room teaching the next week.

“After 33 years of glasses, I can drive at night, teach, and have no glasses for anything,” she says, adding that complete correction of her sight may still require up to several more months of healing. “No more glasses. It’s unbelievable.”

That makes the doctors in the practice very happy.

“We ophthalmologists love gad- gets,” says O’Brien, a specialist in the cornea. “The eye itself is like a fancy type of gadget.”

It sure is, a camera, in fact.

Lenses, layers of tissue, shafts of light, focus, and sharp images that become less sharp over time are some of the features requiring knowledge of physics and chemistry for proper understanding.

The laser employs the science of both.

The device is so sophisticated it can shut itself off instantly if any movement occurs outside a planned procedure.

“This machine does things that were impossible in Vero a year ago,” says Carrie Ludicke, the Center’s Public Relations Director.

And talk about physics. The laser employed by the Allegreto machine, called an excimer laser, depends on a “pseudo –molecule” produced by an inert gas, a reactive gas, and electrical stimulation of just the right kind. The ultraviolet light that’s produced is great for work on the eye, disrupt- ing the surface of the cornea with ablation rather than burning, resulting in faster healing and less likelihood of infection.

Results are bringing in patients like the Stawaras who had put it off for years.

“The new machine made us decide it was time,” says Joey Stawara. “I’m a golfer. Dr. Minotty told me my condition was more like a 3-foot put, while Michelle was more a 40- footer down- hill with a twist. Dr. O’Brien called the machine’s maker to be sure Michelle’s problems were within its abilities, and then we went ahead.

“As for me, I went home, took a nap, and was watching TV that night with perfect vision after 30 years of glasses.”