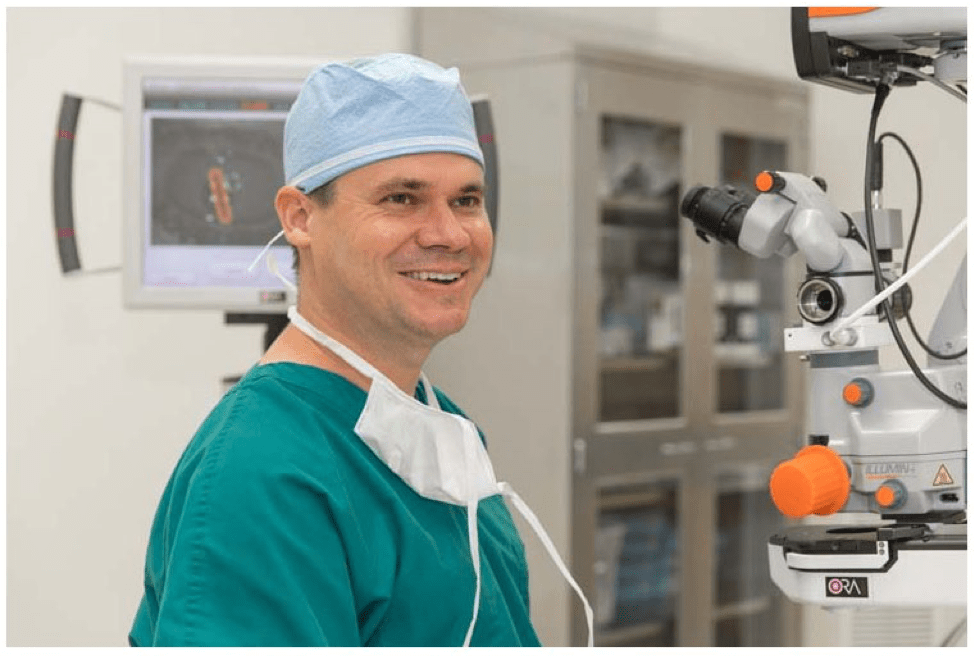 Medical consumers can be a downright demanding bunch.

We always want better, safer, faster fixes for our medical problems, and according to Dr. Stephen Tate, that’s precisely what Vero Beach’s New Vision Eye Center’s “ocular refractive analysis” (or ORA system) is delivering for patients with cataract, astigmatism and other vision problems.

According to Tate, a large number of today’s cataract patients not only want their cataract removed, they also want to be “glasses-free” afterward and, he says, it’s here that the ORA system really shines.

“Dr. [Paul] Minotty and I have both been so pleased with it, we actually got a second system,” says Tate. “The demand for it has been so high we have a system in each of our operating rooms now.”

Of course, technology such as the ORA system doesn’t happen overnight.

Cataract surgery is actually one of the oldest medical procedures known. Its use has been documented as early as the 5th century B.C. – though if you’re squeamish, reading up on the details of how the procedure was performed in the era of the Persian and Peloponnesian wars might not be for you.

Today, “cataracts affect more than 24.4 million Americans age 40 and older, and by age 75, approximately half of all Americans have cataracts,” according to the American Academy of Ophthalmology.

The National Eye Institute at NIH reports that “the number of people in the U.S. with cataracts is expected to double to about 50 million” by 2050.

So just what are cataracts and astigmatisms?

“Cataract,” explains Tate, “is just a clouding of the lens inside the eye; right behind the colored part of the eye – the iris – there’s a lens, and that lens that you have doesn’t ‘turn over’ throughout your life like, say, your skin, where old skin dies and new skin cells grow. The lens of the eye isn’t like that. The lens that you’re born with stays there. By the time that you’re 60, 70 or 80 years old, the lens in your eye is 60, 70, 80 years old.

“It starts to get hazy and cloudy and typically will get a bit yellowish and brown over time. Eventually it gets cloudy enough that it starts to affect the vision.”

“Astigmatism,” Tate continues, “is also extremely common. Almost everybody has some astigmatism.”

The American Optometric Association backs up Tate’s claim, saying “most people have some degree of astigmatism,” and puts the blame largely on “an irregularly shaped cornea or lens that prevents light from focusing properly on the retina, the light-sensitive surface at the back of the eye.”

That can lead to eye discomfort, headaches and blurred vision that needs to be corrected with glasses.

And here’s where today’s demanding medical consumers who come in asking to be both cataract-free and glasses-free come into the picture.

The key is the ORA technology: The system boasts a seemingly mind-boggling combination of algorithms, constantly updating data bases, microscopic imaging, mathematical calculations and graphic overlays that are displayed for Tate and Minotty while their operations are going on.

As Tate explains, for people who have a large amount of astigmatism or other conditions to lead to near-sightedness or far-sightedness, the ORA system allows the new replacement lens implanted in cataract surgery to be oriented so that it focuses vision clearly, doing away with the need for glasses or contacts in most cases.

Asked if the ORA system is so advanced that it actually gets to “know” the individual surgeon, Tate smiles and says “that’s exactly right,” and promptly adds, “it also summates the data from all of the users throughout the world,” giving the surgeon instant access to that data and the likely results for each tiny incision or lens placement.

Still, some limitations do remain. Not everyone can have their cataracts removed and be glasses- free afterward, so it’s important to discuss your situation with your eye doctor and choose the option that’s best for you.