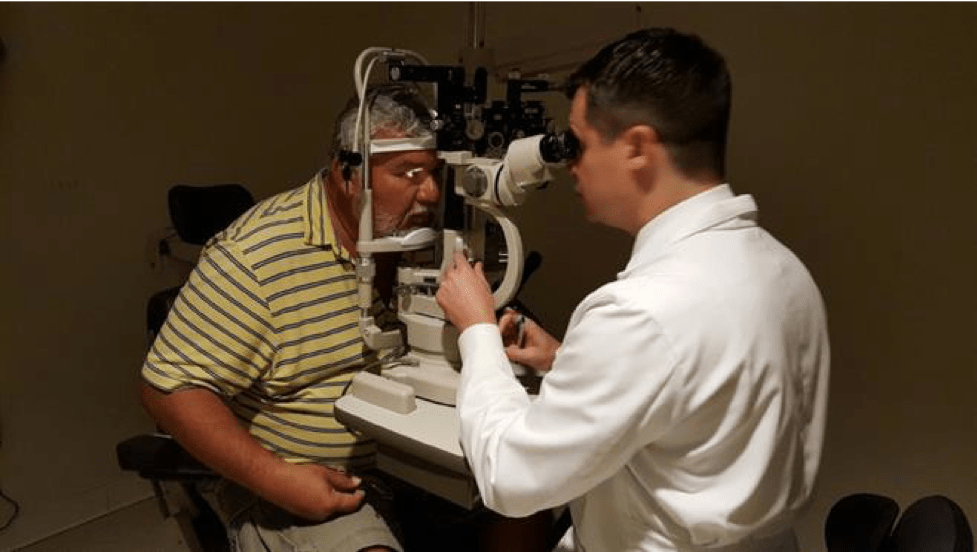 By Siobhan Fitzpatrick Austin, The Newsweekly

For the past few years, life has been a bit blurry for Martha Sapp — as though there was a bit of ‘gunk’ covering the lens of her eyes.

It turns out, she’s far from alone: approximately 20.5 million people in the U.S. have hazy vision issues caused by cataracts.

The most effective way to correct a cataract is to get it removed. But as with any surgery, the process can be daunting.

“I was nervous. But once it’s over, it’s really great,” says Sapp, who had her surgery at New Vision Eye Center in Vero Beach.

Phillip Skitt, another cataract patient at New Vision Eye Center, was also apprehensive. “I was a bit anxious,” he says.

“During routine cataract surgery, the patient is given sedation so they don’t feel nervous during the procedure. Many people are able to sleep through it,” says Skitt’s and Sapp’s surgeon Stephen Tate, an ophthalmologist at New Vision Eye Center.

Both Sapp and Skitt had immediate follow-up appointments with Tate.

“We see patients the day after surgery and approximately 10 days after that to ensure the eye is healing as expected,” said Tate.

Even though Tate tells his patients that the procedure does not take long, both Sapp and Skitt were still surprised at its brevity.

Actual surgery time will vary, based on a large number of variables. But a typical procedure takes only 5 to 10 minutes. This is significantly less time than it took just ten years ago.

“The time required to do the procedure has steadily decreased over the years, as surgical technology and techniques have steadily advanced,” says Tate. “What used to be a very long procedure with variable outcomes has now become one of the safest and most common surgeries performed in the United States.”

For traditional cataract surgery, a scope and special micro instruments are used to remove the cloudy lens — which is what a cataract is — using an opening just slightly more than 2 millimeters in size.

Once the cataract is removed, a special foldable lens is inserted through the same micro-opening. Special medicine is then placed in the eye, eliminating the need for patients to maintain a post-op regimen of eye drops.

But many patients have additional vision impairments, including problems with the retina or optic nerves. Fortunately, cataract surgery at New Vision Eye Center can be customized to correct other issues, at the same time.

Tate and the other doctors at New Vision Eye Center are also able to address ophthalmologic diseases, such as glaucoma, during cataract surgery. For instance, special micro-drainage devices can be inserted.

One patient who underwent this procedure, Nancy Silvestri, is thrilled with the outcome.

“Everything jumped out at me, what I’ve been missing,” said Silvestri with a grin.

Another happy patient is Immaculate Kean — who was delighted, even with only one eye repaired.

“It’s amazing. I can already see the difference,” says Kean.

“We always do only one cataract at time,” Tate explains. “If both eyes need surgery, we most commonly do the second eye, two weeks after the first.”

And the majority of patients do need surgery on both. But the second procedure is not as nerve- wracking as the first.

“I’m already thinking about doing the next one,” says Kean.